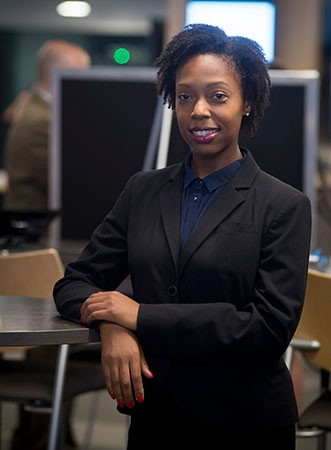 Dr. Nandi Leslie is an Engineering Fellow at Raytheon, serving as an Applied Mathematician and Principal Investigator (PI) at the U.S. Army Research Laboratory (ARL). Dr. Leslie earned her Ph.D. in Applied and Computational Mathematics from Princeton University in 2005 and her B.S. degree in Mathematics from Howard University in 1999.  Before joining Raytheon, Dr. Leslie led and contributed to sensor performance projects for the U.S. Navy for eight years at Systems Planning and Analysis, Inc. from 2007 to 2015. In this role, she served as Program Manager and Senior Analyst, and she developed modeling approaches for submarine force security, using dynamical systems and stochastic processes. In addition, she spent two years as a Lecturer and Postdoctoral Researcher in the Department of Mathematics at the University of Maryland, College Park from 2005 to 2007. Since joining Raytheon in 2015, Dr. Leslie has also supported the U.S. ARL as a researcher and PI on projects related to machine learning and cybersecurity. Dr. Leslie has published over 40 articles in journals, magazines, conference proceedings, and technical reports. She has given over 50 research talks at national and international conferences, including North Atlantic Treaty Organization (NATO) conferences. Her current research interests are focused on machine learning, cybersecurity, and network-resilience modeling. Moreover, she is particularly interested in projects related to using computational modeling for Internet of Things (IoT) security and resilience and anomaly detection.