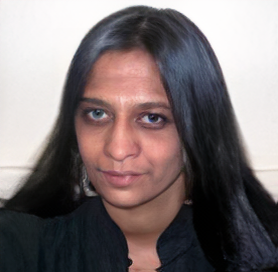 Rehana Patel is a mathematician working in the area of mathematical logic. Her research involves applications of model theory, a branch of mathematical logic, to the study of combinatorics and random structures. Rehana grew up in Bombay and New York City, and did her undergraduate studies at the University of Cambridge.  She received her doctorate in mathematics from Wesleyan University in 2003, under the direction of Carol Wood, and since then, she has held faculty positions at Harvard University, Olin College of Engineering, and other institutions in the United States.  She has been involved in several initiatives aimed at increasing access to, and equity within, the mathematical community. These have included co-organising the 2012 Infinite Possibilities Conference, a conference for under-represented minority women in the mathematical sciences, and co-developing student-focussed curricula with international teams of educators, from countries such as India and South Africa, through the Olin College Collaboratory.  She is delighted to have the opportunity to visit AIMS Senegal this year again.