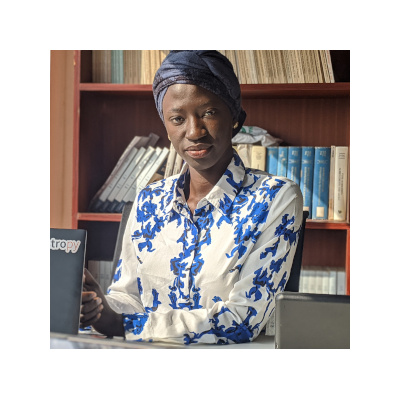 In May 2018, Sokhar flew to Colombia for her Co-op work placement at the Centro de Pensamiento Estratégico Internacional think tank. During the work term, she used web scraping, web crawling and sentimental analysis to analyse gender-based violence in Colombia, Costa Rica, and Mexico, equally exploring Tweets with Python and Tableau to identify cities with frequent incidents of gender-based violence. Furthermore, she wrote an algorithm to extract data from different websites in Latin America to measure and make available data on the attainment of the SDGs in these countries. A few weeks to her graduation, together with Deborah Dormah Kanubala, another alumna, Sokhar launched Women Promoting Sciences for Younger Generations (WPSYG), born out of their concern for the future of the continent, to lay the groundwork for a new cohort of African scientists. WPSYG worked with AIMS’ Gender and Inclusion Department to develop their concept note, and the initiative was launched during the celebration of the International Day of Women and Girls in Science in February 2019 at AIMS Senegal. Sokhar served as Data Generation, Programming and Analysis Officer at Global Research and Advocacy Group in Senegal, before joining the African Master’s in Machine Intelligence (AMMI) program at AIMS Ghana. Now Data science & IA Engineer at Obertys, a software technology company in Senegal, Sokhar’s biggest goal is to promote girls in science.